AJR is a New York City-based indie pop band composed of brothers Adam, Jack, and Ryan Met (born Metzger). The band is a DIY pop group who write, produce, and mix their own material in the living room of their Chelsea apartment. Their music style has been described as "eclectic", combining elements of pop, barbershop, electronic, and dubstep music. They have opened for Demi Lovato, Hoodie Allen and the Wanted. In Summer 2014 the band went on tour with Lindsey Stirling. 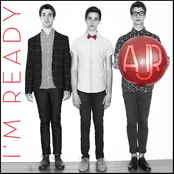