Basic Operations have been described as a multi-genre, crossover of style and substance, somewhere between soul and drum and bass. Their early influences are wide and varied but include Calibre and LTJ Bukem, especially his Logical Progression LP. The outfit hails from North Carolina and is a partnership between Nathan Hayes aka Atlantic Connection, and Kevin Focus aka Kevin Jekel. They released their first 12” in 2001, with Phuturo Records which 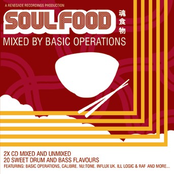